Second Lieutenant R.E Everritt was also killed at the same time as my Great Grandfather John Hogan. With the help of members of the Great War Forum I have been able to add the following information about him. He probably knew John well.

Born on 2 Oct 1875, the son of LCol Herbert Everitt, RMA of 17 Norfolk Street, Winchester and Alice Francis, daughter of John Peto of Malvern House, Brighton
Educated at Winchester College from 1889 to 1894 (School Prefect, won silver Medal for Latin Speech and Duncan Prize for Reading; played a leading part in the Shakespeare Society).Went to Worcester College Oxford with a scholarship and took Second Class Honours in 1898 (BA 1898; MA 1900) Assistant Master, Packwood Haugh, Hockley Heath from 1900 to 1903. From Sept 1902 to Apr 1906 was Asst. Master at Clifton College. At King's School, Canterbury from 1905 to 1915 (was an officer in the Jr. OTC) Enlisted in the RGA as a Gunner in 1915 and served with 162nd Siege Battery, RGA, reaching the rank of Bombardier in 1916. Received a commission and went to France in May 1917. Served in France with 299th Siege Battery, RGA. KIA by a shell splinter at Poperinghe Belgium on 24 June 1917 while dressing in his billet. Rupert was 5’10” tall, 39” chest and 171 lbs weight on enlistment. He was also a freemason in the United Industrious Lodge No 31 in the masonic Roll of Honour of the Grand Lodge of England.

_Rupert Edward Everitt. Photo Courtesy Of Dick In California. Source-Wykehamists Who Died in the War 1914-1918, vol. 1. 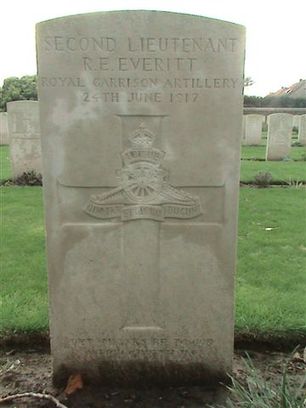 _His obituary from The Times of 16-7-1917. Clipping Courtesy Of Steve In Peterborough.
_

" At approximately 10am on the 24th of June 1917 he was shaving in his billets at the crossroads at Elveringhe immediately behind the guns, when a shell exploded 4 yards outside his billet and a piece of shrapnel came through the window hitting him in the head and killing him instantaneously "

A brass memorial tablet to his memory was unveiled after the war in the Big School Room at King's.
when the billets were shelled they where near the crossroads in Elverdinghe, two guns were completely destroyed. The billets would have been close behind.

Both John and Rupert are mentioned on the " Hellfire Corner " Website at        http://www.fylde.demon.co.uk/gardiner9.htm